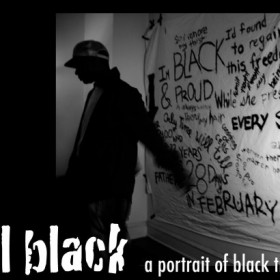 Award-winning documentary Still Black: A Portrait of Black Transmen explores the world of female to male transgender transition in the African American community, centered on the stories of six thoughtful, eloquent and diverse transmen. Preachers, teachers, students and activists educate us simply by making their presence known. Each man brings a colorful and complex richness as he describes his relationship to himself, as well as others in his life — the cadence of his voice keeping in rhythm with how the speaker displays himself to the camera. The film received an Isaac Julien Experimental Award from Queer Black Cinema International Music Festival and an Audience Choice Award for Best Documentary in the ReelOut Queer Film + Video Festival.

Please join us for a screening of Still Black: A Portrait of Black Transmen. The screening will be followed by a Q&A with Director Kortney Ryan Ziegler and Moderator Jennifer Tyburczy (Feminist Studies, UCSB).

The event is free but a reservation is recommended in order to guarantee a seat. Tickets will be released on Tuesday, May 2 at 11am.

“Trans Media” at the Pollock Theater will showcase contemporary media work in television, narrative filmmaking, and critical documentary in an effort to explore the relationship between sexual orientation and gender identity outside of a rigid binary view of the world.