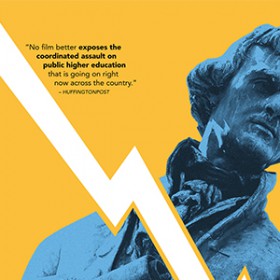 The documentary “Starving The Beast” examines the on-going power struggle on college campuses across the nation as political and market-oriented forces push to disrupt and reform America’s public universities. The film reveals an historic philosophical shift that reframes public higher education as a “value proposition” to be borne by the student as a consumer, rather than an investment in citizens as a “public good.” Financial winners and losers emerge in a struggle poised to profoundly change public higher education.

After the screening, Professor Lane Hall will discuss developments in Wisconsin as a case study of challenges to public higher education, as well as the disruptive role of art and activism in academia. The discussion will be moderated by Professor Patrice Petro, Director of the Carsey-Wolf Center.